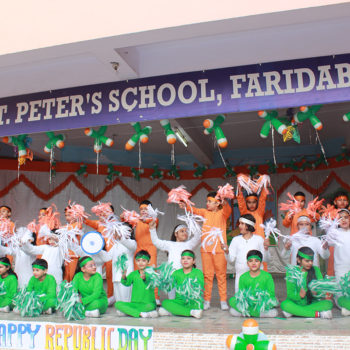 The fervor of freedom the 26th January on the nostalgic occasion of this red-letter day,70th Republic Day was celebrated with pride and patriotism at St. Peter’s School Sect16 A on 25 January 2019 by the “C” sections of all the classes.

The festivities commenced on a musical note. School Band played the welcome note that reverberated everyone with the feelings of patriotism. The entire school was resplendent in the shades of tricolor. Many dance performances stole the hearts of everyone. The ceremony began with the auspicious lamp lighting by the revered chief guest Group Captain P.S. Nair.

The power and energy exhibited by the youngsters were mesmerizing. The chief guest, in his speech, exhorted every student to maintain the dignity of being a citizen of a Republic and emphasized on the self-discipline. Remarkable mime presentation and heart touching dance drama based on the life of a soldier brought tears in everyone’s eyes.

A colorful display of flying tricolor balloons adorned the sky, giving the sense of freedom to everyone. Young Peterians took the pledge to uphold the honour dignity, integrity, and uniqueness of our nation.

Recent Posts
About Our School
St.Peter’s School being a Christian institution, its first preference is to educate Christian(Catholic)children; but admission to the school is open to all.
Find Us
Address :
Sec – 16 A, Faridabad, Haryana, 122002
Phone :
0129-4273333
E-mail :
st.peters_fbd@yahoo.co.in