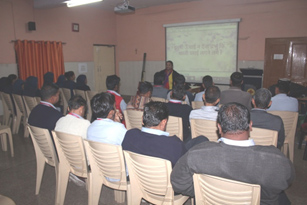 (for drivers, conductors and bus caretakers)

19th December 2019: An orientation program was conducted for the drivers, conductors, and caretakers of the school bus by Mrs. Reeta Rastogi (Teacher). It aimed at providing the guidelines to be followed on bus as well as on school premises for the well being of students. They were also informed about the ill effects of smoking and drinking and suggested some ways in which one can come out from such addiction.

Recent Posts
About Our School
St.Peter’s School being a Christian institution, its first preference is to educate Christian(Catholic)children; but admission to the school is open to all.
Find Us
Address :
Sec – 16 A, Faridabad, Haryana, 122002
Phone :
0129-4273333
E-mail :
st.peters_fbd@yahoo.co.in